Thanks to the Ontario climbing community: plan amendments win 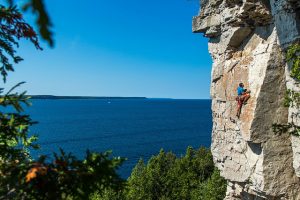 Climbing will continue to be allowed in a Nature Reserve where it is an existing use, and is generally allowed outside of Nature Reserves, subject to management plans.

This represents a significant win for the climbing community and stands as an example of what we can accomplish when we come together as a community. While this recommendation is less than we asked for, it is something that we can live with. We at the OAC currently believe that this will not affect climbing at some of our highest-profile areas like Lion’s Head. We will continue to advocate for climbing access throughout Ontario. The OAC will be calling on the climbing community shortly in an effort to address long-held climbing closures in Provincial Parks.

“Numerous comments received from individuals and rock climbing organizations concerned that proposed policies will restrict opportunities for rock climbing which is a tourism opportunity. They state that there is no indication that the activity causes environmental harm. They propose that rock climbing be allowed to continue where a history of climbing activity has taken place and support preparation of climbing management plans.”

It lists the consideration:

“Where rock climbing can be identified as an existing use as defined in the [Niagara Escarpment Plan], it may be allowed to continue in NEPOSS.”

You can find the recommendations on page 43 of the following PDF document:
http://escarpment.org/_files/file.php?fileid=fileednIjxTVCQ&filename=file_2016_12_14_15_Co_ordinated_Review_Policy_Analysis___Policy_Areas_Complete_RedactedTC.pdf